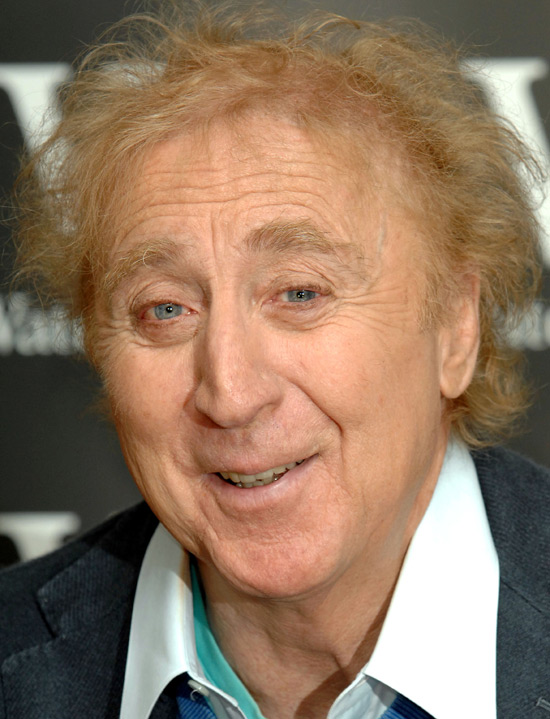 Silver is the color of laughter… RIP Gene Wilder.

My husband asked me to talk about the color silver. Silver is source of humor for us, because I tease him about his strawberry-blond beard going gray, and he insists it’s going silver. Alternately, when my roots are growing out, he’ll point out that there are streaks of silver in my hair, and I’ll glower at him because what woman wants to be reminded that she no longer has her childhood hair color, or that no amount of will will make hair grow in pink.

But the glowering isn’t really meant, and silver is something we laugh about.

Silver for me is the color of rain. From my earliest memories I’ve loved rain. I love the kind of rain that comes in thick, heavy drops, and the kind that is so fine you can’t even tell it’s raining unless you catch a glimpse of it from the corner of your eye.

I even like the needle-sting rain that precedes sleet in what passes for winter in Texas, which isn’t really, all that different from what passed for winter when I lived in northern California. I like the staticky hiss of rain when it falls into the pool, and the way when it rains on end – as it often does here – and then suddenly stops, the world sounds brighter because the background sound of rainfall has sharpened all the sounds.

There are times when rain isn’t quite so welcome, and times when it is. Today, on the way home from a routine visit to my doctor, the skies opened in a sudden silvery downpour. Once inside, I turned on my computer and learned Gene Wilder had died, and the summer storm felt appropriate, somehow, as if Mother Nature herself was acknowledging that this wise, funny, surprisingly gentle, actor, director, and writer was transitioning, or had transitioned, to a different state of being.

I’ve been reading all the different reports of his death, all the mentions of his iconic roles. For many, Willie Wonka and the Chocolate Factory was their first Wilder. I love that film, and his performance in it, but my first introduction to him was in Blazing Saddles.

However, the story I keep coming back to is one from the book Gilda Radnor wrote while she was battling ovarian cancer. She talked about filming The Woman in Red, and how, after the film had come out, someone told Gene he should have married the beautiful girl from that film. He responded by telling the person, “I did.”

I don’t believe in a literal Heaven, but if there was one, I think today would find Gilda welcoming Gene inside, and then I think there would be some kind of cosmic Old Comedians home, where Gene and Gilda would trade stories with Robin Williams. Belushi would show up too… and David Bowie would be there just because Bowie would fit in with every crowd.

Obviously other people would eventually be part of the gathering, but the one constant would be that there would be laughter… quiet laughter, raucous laughter, soft titters, loud guffaws, and big, bold belly laughs – as many kinds of laughter as there are kinds of rain.

Alternatively, the energy that was once Gene Wilder’s life force is now sprinkled throughout the universe, touching all of us with humor and kindness and grace, the way his performances always did.

Either way, he will be missed.

While Fuzzy was on a late conference call, I made #dinner. Chicken tikka masala & roasted red potatoes. (I’m not a rice fan.) All veg from @farmbox_delivery #whatsfordinner https://t.co/38TEyYcHbV https://t.co/rcdzKnJQpz

@ScholarStephens: Check out this #bookblitz of a high-stakes courtroom drama of The Last Trial of T. Boone Pickens by authors @LawChrysta and @lsteffy. #LSBBT https://t.co/1W22mPZfVD
h J R
@melysse

Parched. She could no longer remember a time when she was not parched, when her roots did not dig so far into the earth that they nearly breached its molten core. Sometimes she had flashes of memories of being supple of limb and well-coiffed with lively green leaves. But those recollections were dusty like the […]

Doing the Right Thing (a Basil and Zoe story)

“Why does doing the right thing never feel good?” “I do not understand.” Basil’s voice was mild as always. “Well, take us for example. We’ve been dating since I was seventeen, but until I was eighteen, we never went farther than kissing. Seventeen is legal throughout the Coalition of Aligned Worlds, so why did we […]

Review and Giveaway: Trace of Doubt, by DiAnn Mills

About the book, Trace of Doubt Publisher: Tyndale House Pub Date: September 7, 2021 Pages: 432 pages Scroll for the Giveaway! Fifteen years ago, Shelby Pearce confessed to murdering her brother-in-law and was sent to prison. Now she’s out on parole and looking for a fresh start in the small town of Valleysburg, Texas. But […]