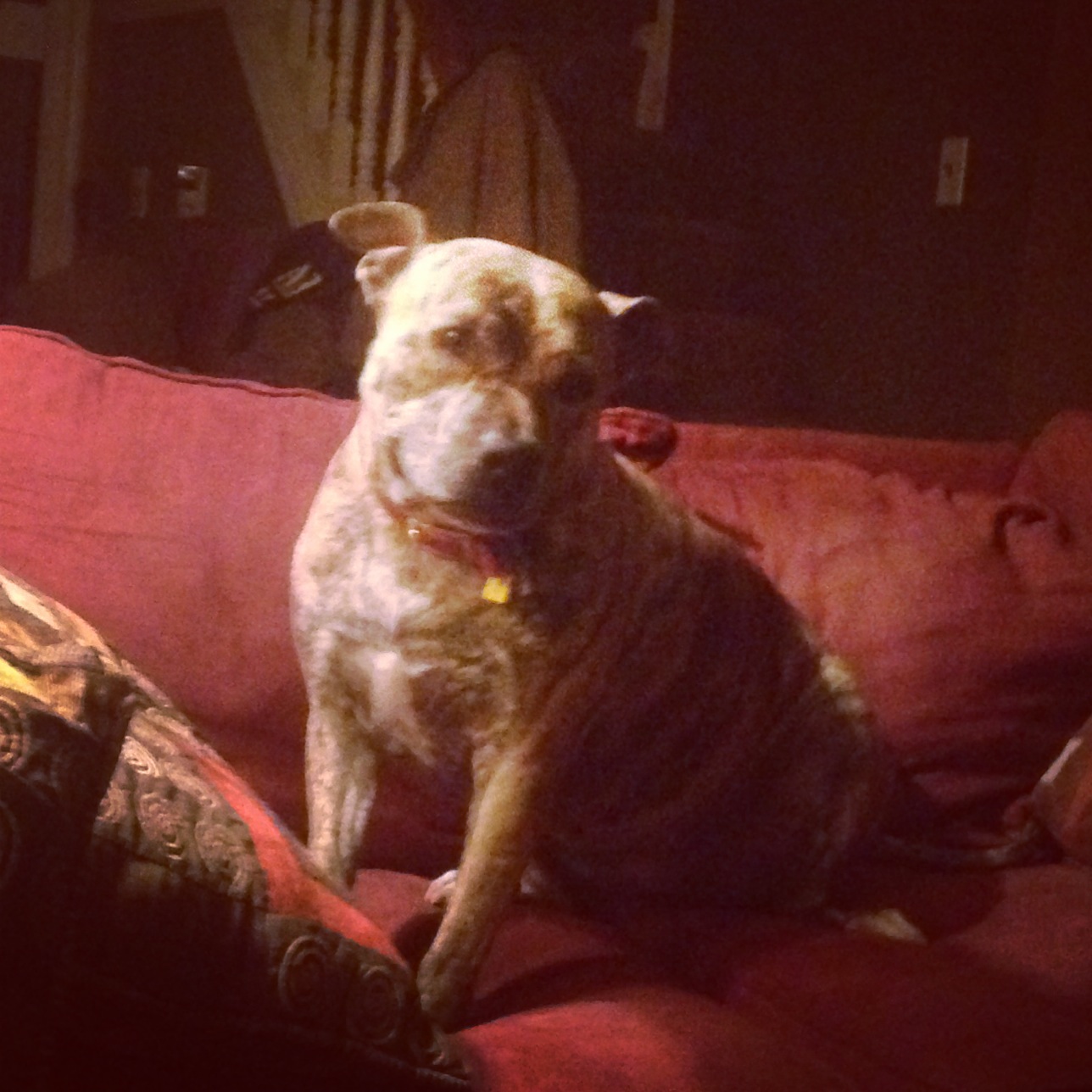 Right now, brown is the color of my foster-dog, Madison, who was adopted and returned over the week of my birthday.

My young friend Berkley asked me to talk about the color brown. I thought about all the things I associate with brown: coffee and chocolate, obviously, but also rich, loamy soil, the leather of saddles and bridles – I’ve always loved the way tack smells – the soft suede of my favorite boots.

But right now, I associate brown most with Madison, my foster dog.

Madison is a 4 year old American Staffordshire Terrier mixed with a little bit of Pyrenean Shepherd, and when she finally came to us a few years ago she’d already run out of time at a rural shelter and been sent to boarding to try and buy her even more time.

The rescue I work with, Shelter2Rescue Coalition doesn’t have a facility where we keep dogs. Instead, we’re a network of foster families and we pull dogs from a bunch of rural shelters around the Dallas-Fort Worth Metroplex. Our goal is to get to a point where those shelters never have to euthanize animals for space.

There are whole stretches of time when we are successful, when the only dogs put down are those so sick they literally cannot be saved. Then there are times when we feel like no matter what we do, failure is all we see. When one of our shelters has no choice but to euthanize an animal, we all take it personally.

Now, as a fosterer, my part in rescue is relatively easy. I take dogs like Madison into my home and treat them essentially as if they were just another part of my family, although the foster dogs aren’t typically allowed to sleep on the beds or be on the furniture, simply because we don’t want to encourage behavior a potential adopter may not like.

But the women who run our organization – Kimberly, Louisa, and Liz chief among them – these women are tireless, and they fierce.

Liz is a sucker for hard luck cases, and jokes that dogs see her as one of them. Her passion is quiet, but she’s the one who has the collection of lifers, including one dog who has palsy leftover from having parvo as a puppy.

Louisa is an English ex-patriot who has at least one ‘foster-fail’ of her own (that’s when a foster dog is so hard to give up that you end up keeping it) and she also takes in cats – something I can’t do because I’m incredibly allergic.

And Kimberly – she’s amazing. We have a dog in foster care with another volunteer – Rocco the Rottweiler – who needs special training to correct some horrible mismanagement and help him become adoptable. She’s so committed to helping animals that she’s willing to fund time at a board-and-train kennel from her own pocket just to give him a chance. She built a kennel in her garage, she takes in puppies, and she’s a huge proponent of feeding raw foods and not overdoing vaccines. (By the way, do NOT let your vet vaccinate for lepto, the vaccine is more dangerous than the disease.)

When I get discouraged, like I did a few Christmases ago when an abused Chihuahua died while in my care, or when I look at Madison who just got back from a week trial with people who signed the contract and gave us a check for her adoption fee, only to turn around less than two days later and return her because of a minor incident that was neither dangerous nor a sign of aggression (this dog would lick you to death before she’d consider hurting you) that would have been totally solvable given just a little more time.

But Madison is safe here, and if it turns out that she’s meant to be with us forever, we’ll deal, though at this point I think my non-biological brother Ben will be taking her with him when he finally (finally) moves out in a few months.

Unless, of course, you or someone you know wants to adopt her.