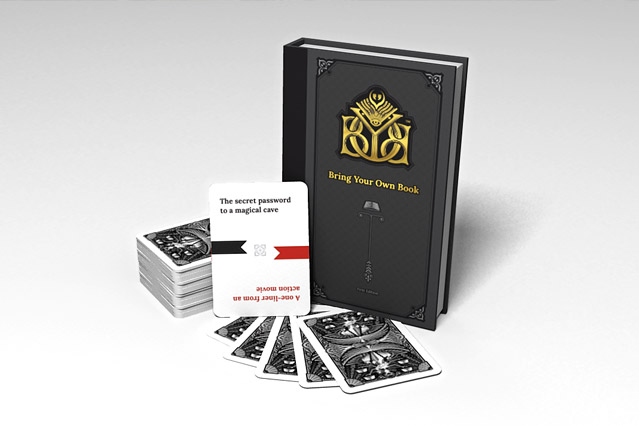 At my birthday party, we played Bring Your Own Book

Okay, what do a cookbook, a self-help guide, a manual on writing science fiction, an RPG rulebook, the latest of Jim Butcher’s Dresden Files novels, an S.M. Stirling novel, Lin-Manuel Miranda’s #Hamiltome (that’s the book about the creation of the musical Hamilton), and The Klingon Art of War have in common?

I actually hate guessing games, so I’m going to tell you: they’re the books we used for a game of Bring Your Own Book at my birthday party earlier tonight.

My actual birthday was on Wednesday. I’m older than Nuchtchas and younger than Dave Slusher and Kreg Steppe, and I’m not actually ashamed of my age, I’m just playing with you because I’ve had just enough beer to be slightly silly, and just enough coffee and cake to be hyper, and this is why we celebrated on a Saturday instead of in the middle of the week.

But anyway, Bring Your Own Book. I was part of the kickstarter for this game, which was created by DoBetter Games and published for commercial release by Gamewright. It uses the same model as Cards Against Humanity, which, of course, uses the same model as Apples to Apples – you have a bunch of prompts and you offer up your best response, and the judge chooses the one they find funniest or grossest or most appropriate, or… whatever.

The difference, which should be obvious from the title, is that instead of a second set of cards that you use for responses, in Bring Your Own Book, you literally bring your own book, and use it for the source of prompts.

Depending on the number of people, you have to win a certain number of cards, but, just to mix things up, every time someone acquires a third card, you rotate the books.

If this sounds like a lame birthday, trust me, it wasn’t. While I don’t play video games, and almost never play RPGs (except 7th Sea), I love board games and card games, and we have game nights a lot. We spent much of the spring playing the Firefly board game  – in fact, one of my friends gave me the game mat of the whole damned ‘verse for my birthday this year – and I’ve kickstarted more than I care to admit.

(I’ve also amassed quite a collection of really lovely artsy playing cards, but that’s another story.)

But anyway, Bring Your Own Book ended up being great fun, we finished the night with laughter, and I am now off to bed.