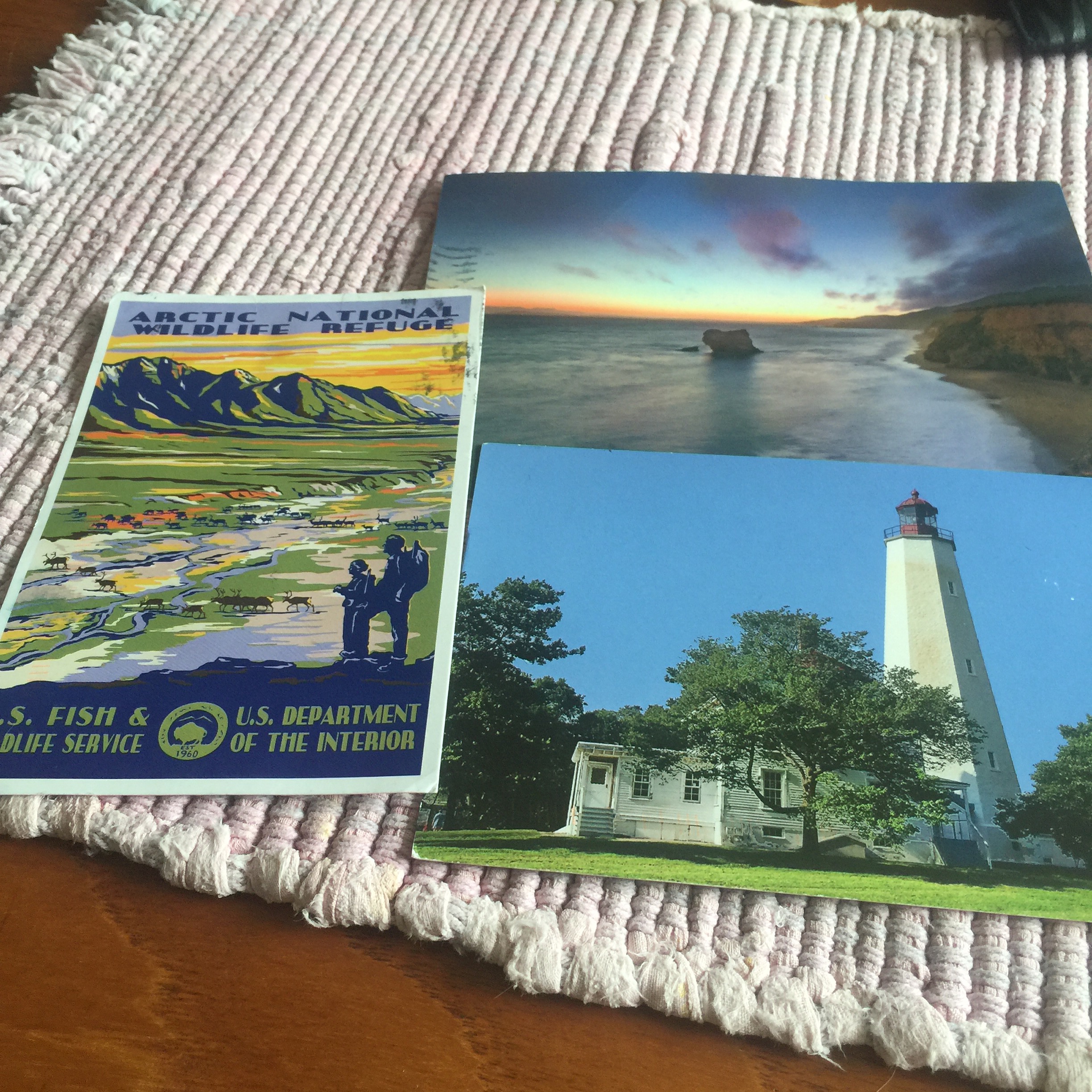 So, here’s the thing. I write the content first, but when I record, I don’t typically stay exactly on-script. Most of the time, what you hear and what I wrote are fairly similar. Tonight? I kind of rambled.

About a month ago, a friend of mine mentioned a project she’d signed up for: Jennifer Belthoff’s Love Notes project. Basically, you are assigned a pen pal for three weeks, during which time you send a postcard a week, and you’re given prompts as jumping-off points.

I’m a sucker for writing memes, so naturally I signed up. While I loved the fabric postcards I received, what I loved even more than the project itself was the guarantee of real mail. Once a week, I was going to receive a postcard – not an ad, not a bill – a postcard. An honest-to-god, handwritten postcard. From a real live person.

I’ve been a sucker for real mail ever since I was a little kid and, in an effort to keep me from driving my grandparents crazy one summer, I was presented with a book called Free Stuff for Kids. It was basically a collection of different things that kids could request by mail. Most of them were free; some required that you pay for postage; nothing was over a dollar.

By the time I’d sent the first five envelopes out, and received the first two items back, I was hooked. I signed up for a pen pal, and we wrote back and forth for a couple of years, until each of us moved, and we lost touch.

At the same time, my grandfather had taken it upon itself to keep a regular written correspondence with me, going so far as to carefully print his letters to me on wide-rule paper so that I could actually read them without help. (I was only seven; I hadn’t learned to read cursive yet.)

I’m very fortunate that I come from a family of letter-writers. Sure, we use email and text for immediate things, but real letters still get sent back and forth, and, having been inspired by the Love Notes project, this summer we’ve been sending postcards back and forth, as well. My godmother, who is also my aunt, and I have been exchanging postcards this summer – she keeps sending me cards collected from trips to Point Reyes, even though she’s writing them from her husband’s family’s summer house in Amagansett. Then again, I’ve been sending postcards featuring the La Paz whale shark from my house in Texas. It’s all good, right?

A bunch of us who participated in the post card project began sending ‘extra’ postcards to people we thought would appreciate them. My friend Debra surprised me with one, and I sent one to her and one to our mutual friend Becca. A few days ago, I got a card from Becca  – a picture of a coffee cup – she said it reminded her of me, and so she had to send it. I haven’t yet found the perfect card to reply with. But I will.

On and off this summer, I’ve also been reading letters – Some of Alexander Hamilton’s letters to both his wife (Eliza) and his sister-in-law (Angelica) are included in the “Hamiltome” the book of essays about the making of the musical Hamilton. (The book also includes the annotated libretto – it’s a fascinating read.) The other letters I’ve been reading are a collection from Laura Ingalls Wilder, but while I devoured the Hamilton book, I’m savoring these. Her writing style was so simple, and yet some of her imagery is so vivid it feels like a postcard.

I’ve changed a lot since my early letter-writing days. I don’t watch for the postal delivery person any more, and I’m more apt to receive packages then thick, newsy letters, but I still love that a piece of real mail isn’t just something to read. It represents the time and attention the sender took to write it, and it’s also something they touched. Something they carried to the mailbox or the post office. It’s a textual portrait of a single bubble of time.

Real mail will never go out of style.